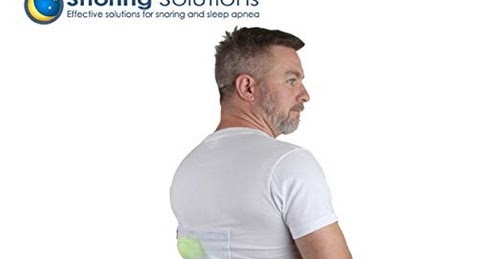 [Trigger Warning: Everything’s fine, but there is a death scare below. Skip if you’re feeling panicky.]

[Also if you just want the DIY without the back story, skip ahead to the “Read More” jump.]

I’ve been hinting about it long enough, so here’s the deal:

Just over a month ago I started noticing that John stops breathing in his sleep. He tends to snore, so the sudden silences would wake me up. I’d count down a few seconds, start to panic, and nudge him into a sudden gasp for air. We agreed he should sleep on his side, and started looking into ordering a sleep study for him.

Shortly after that – just a few weeks ago – I woke up to silence again. John had been getting annoyed by my constant nudges to get him to roll over, so I did my best to wait, to count down a few seconds. Surely he’d breathe soon, right? Nothing. His chest wasn’t moving. I forcefully shoved down the rising panic and tried to say something softly, but it came out as a squeak. Still nothing. No movement. No sound. I reached out to touch John’s arm… and it was ice cold.

I grabbed John and let out a wail that was half his name, half sheer terror… and a millisecond later he gasped and sat up, panicking himself over why *I* was making that sound.

We were up for hours after that. After my tears dried, John swore to me he’d do whatever it took to ensure this never happened again. His doctor’s appointment was still weeks away, though – and a sleep study would be weeks or months after that – so we started searching for ways to at least keep John on his side while he slept.

Side-sleeping is critical for anyone with apnea who doesn’t have a CPAP machine to help them breath. When you’re on your side your tongue can’t fall back and choke you, and sometimes you won’t evenneeda machine if you sleep on your side, as in my case. (I have mild apnea, but only if I’m on my back. Since I’ve trained myself to stay on my side, I don’t need the machine.)

The problem is, John LOVES sleeping on his back, and despite his best intentions, would inevitably roll over in his sleep and start to choke again.

The common solution for this – as any cursory Google search will prove – is to sew a Tennis ball into the back of your shirt. The theory is the ball will poke you if you roll over, and wake you up just enough to get you to go back on your side. 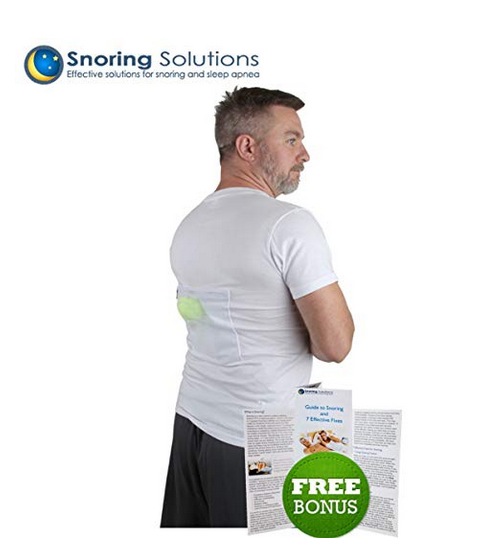 If you’re not feeling crafty, you can even buy a shirt like this on Amazon for just over $20.

I’m sure the Tennis Ball method works for some people, but here were our issues with it:

1) We have a soft memory foam mattress, and John’s built like a linebacker – so it’s conceivable he could still roll over on the ballwithoutwaking up.

2) Even if the ball did wake John up, that means he’s waking upa lot– which isn’t very restful. Wouldn’t it be better, we thought, to have something that physically won’t LET him roll over?

3) John wears a fresh sleep shirt each night, so we’d have to make LOTS of shirts with balls in them. Ug, SEWING.

So we kept looking, and discovered the only other side-sleeping aids were a variety of “bumpers” and backpack-like apparatuses: 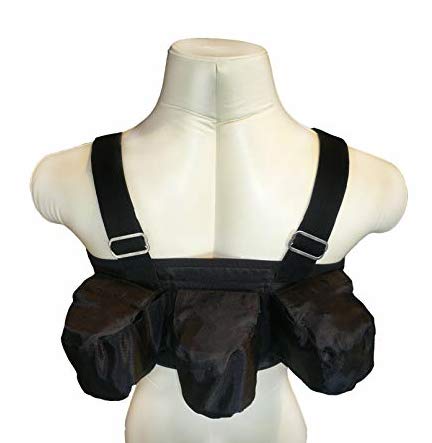 This “Bumper Belt’ looked promising, but the widest strap goes right over the pectorals (ouch) and it costs over $100.Doubleouch. 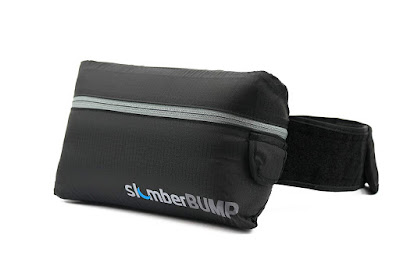 … but this could twist around your waist unless it’s snug, and John didn’t want a tight band around his middle while he tried to sleep. (Also this glorified fanny pack costs $75. Dang.)

We were in crisis mode, so our first solution was to work with what we had – and it was surprisingly effective: 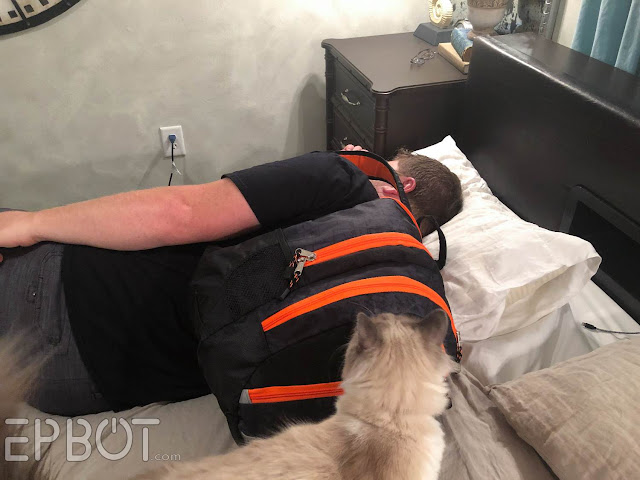 We stuffed two throw pillows in a backpack, and John wore that to sleep. This supported John completely on his side, so no matter how he tried, he couldn’tpossiblyget onto his back.

Within two nights, John reported he was already feeling more rested. Between no choking and no Jen-nudges, he was finally getting some uninterrupted rest!

The stuffed backpack wasn’t a permanent solution, though: after a week the straps were leaving marks on John’s shoulders and upper arms, where they cut into his skin as he shifted around and put his arms over his head. (He likes to sleep on his stomach with his arms up sometimes.)  Not to mention the backpack was obviously VERY bulky in bed, ha. Nothing like gettingwhappedby a giant nylon bag when your hubby rolls over in the middle of the night, lol.

We had a few ideas for a new backpack we could sew, and decided we wanted to use pool noodles, since they’re firm but extra light.

When John went to the Dollar Tree to buy the noodles, though, he instead found something we’d never seen before, and which turned out to be the perfect solution: 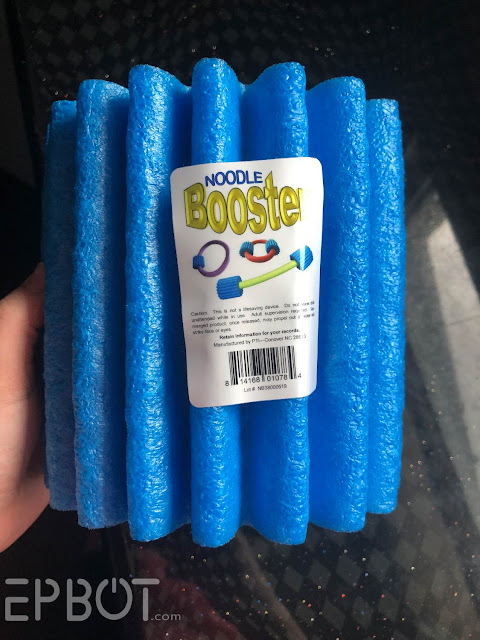 It’s called a Noodle Booster, and it’s meant to fit over pool noodles to make them extra floaty. 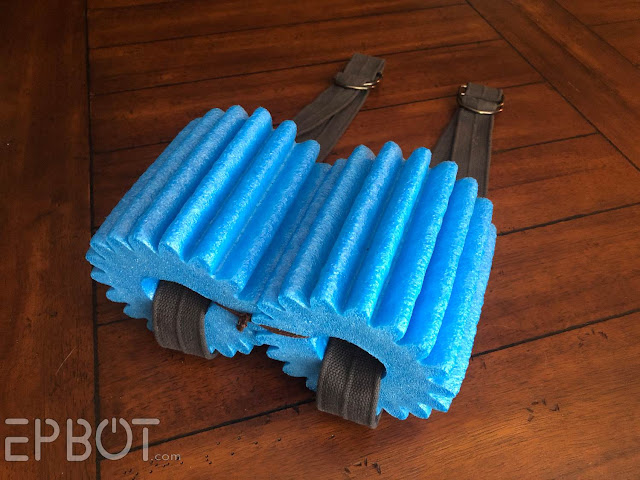 All he did was tie the two boosters together using strong cord, and then put two adjustable belts through the Booster centers. (Most of John’s cargo shorts come with these canvas D-ring belts, so we have a whole basket of them.)

So to sum up, all you need are 2 Noodle Boosters, 2 belts, and a cord to tie the boosters together. THAT’S IT. 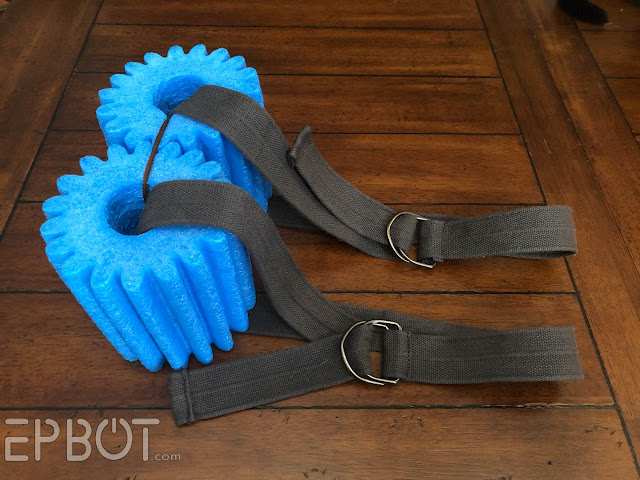 I know it looks strange, but this thing has been a life and sanity-saver for the past few weeks.

Here’s how it fits: 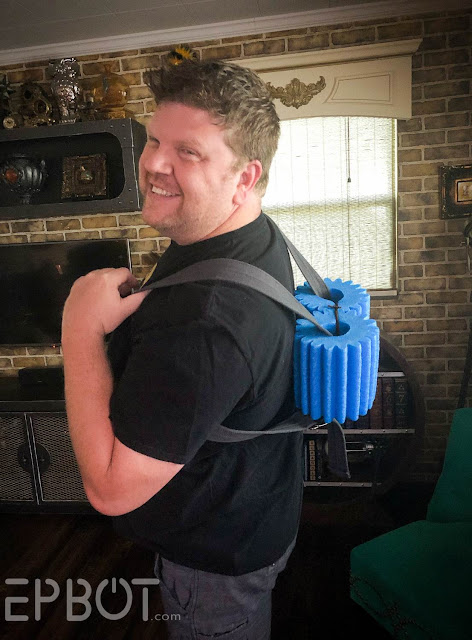 Me: “John, this is a serious post about a potentially serious issue and we’re trying to relay some serious information here.” 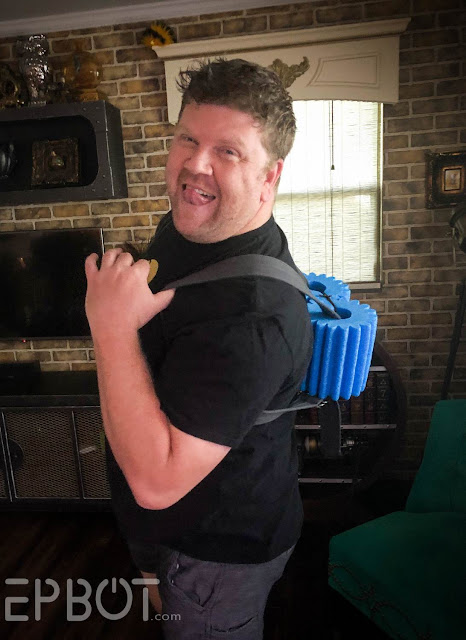 These bumpers only stick out about half as far as the backpack, and overall are a third of the size and weight, so they’re infinitely more comfortable: 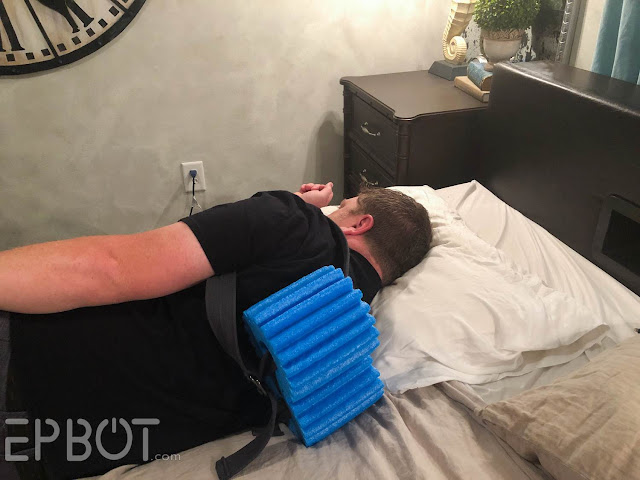 They still completely support John on his side, though, and prevent him from rolling even partially onto his back. Bonus: the foam texture is slightly grippy, so it holds firm and doesn’t slide back on the sheets.

If you find that the straps are too restrictive, you can sew in a
small section of heavy-duty elastic to give them a little stretch. John
hasn’t found that necessary, but it’s an option to make them more
comfortable. Just don’t use ALL elastic, or it won’t hold you up properly.

Since this saga began John and I’ve begged and cajoled our way through all the medical red tape to get a sleep study done. After John’s breathing tests some absolutely phenomenal ladies at Florida Lung, Asthma, & Sleep fast-tracked a sleep study for us (I think they saw the tears in my eyes), so we only had to wait a WEEK instead of the usual month. I really did cry then, I was so grateful.

The study results were sobering, and confirmed my fears: John stopped breathing over 65 timesper hour.That’s more than once a minute! No wonder the poor guy needs a nap most afternoons, yeesh.

We’re still in medical limbo waiting on a CPAP machine, but ’til then, at least we have this side-sleeper to keep John safe and breathing easy. I only hope our solution helps someone else out there, too! Whether you’realsowaiting on a machine, or just need a way to stay on your side to help with snoring, it literally doesn’t get any easier, cheaper, or more effective than this DIY. The hardest part is just finding the Noodle Boosters, since I don’t see them online. Check your local dollar stores – and quickly, since Summer is almost over! If you do find a store that carries these, leave a note in the comments to help others find them.

[UPDATE: It turns the Noodle Boosters are a new product ONLY available at limited Dollar Trees. According to the manufacturer they won’t be made again until next year, so grab ’em if you see them!)

As I’m sure you can imagine, this experience has been harrowing for both me and John. Since the Big Scare I’ve been obsessively waking up through the night to check on John’s breathing. Even now I keep starting awake in terror, as I’ve internalized the fear to an unconscious level. Between that and then spending our days fighting through all the insurance mess and scheduling tests and follow-up appointments, both of us are feeling a bit worn out, ha. Thank you all for the support and love, even when you didn’t know what was going on behind the scenes. Just another reminder to be kind, because everyone is out here fighting a hard battle.

This isn’t our prettiest craft, and it’s definitely not our geekiest… but if it helps even one person avoid what we just went through, it’ll be our best one yet. 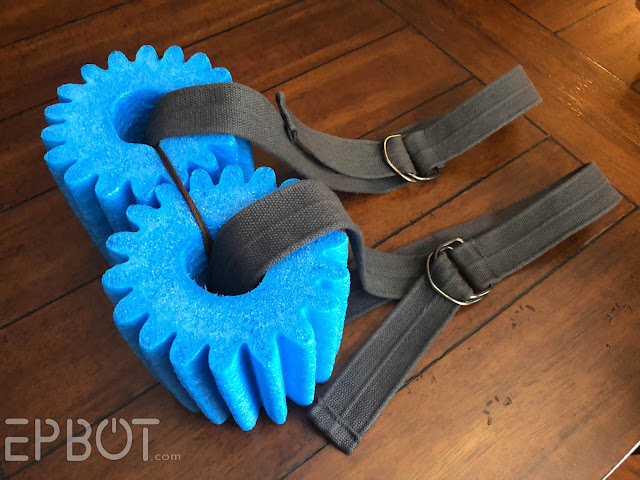 I know we don’t usually talk about sleep apnea because snoring is embarrassing, but that means we never know who among our friends has it. Heck, just in the small circle I’ve mentioned this to, I’ve learned lots more wear or use sleep aid devices than I ever suspected. So please, pass this DIY along. Share it on your page. You never know who might be awake at 3AM, tearfully googling for a solution – any solution – to help her husband breathe.

I love you all. Go be kind to each other.

P.S. – Just wanted to add: There are several types of mouth guards for sleep apnea that can also help, and John *has* tried one or two. They’re not easy to get used to, though, and John finds them too painful. I wanted to mention them in case you’re researching your own options, though!